Pictured above are part of the delegation from  Pont-Audemer, led by their Mayor Michel Leroux,  meeting the  the Mayor of Ringwood Tony Ring and his wife Paula on May 30th at the start of the Twinning visit. 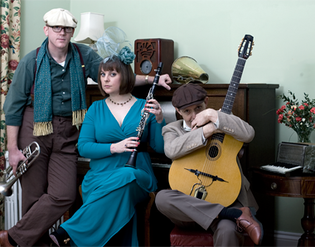 Our final joint event with The Meeting House was that amazing band
FB Pocket Orchestra.
They have been performing all over the south of England this year and we were lucky that they  managed to fit us in to their very busy schedule.
They entertained us by performing a huge range of music on a wide variety of instruments in a very talented production on Novenber 29th. 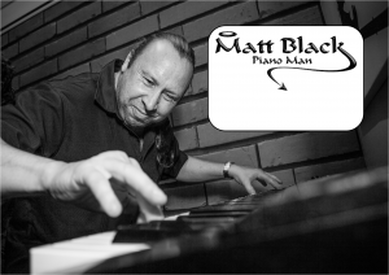 Our last musical event in September was Matt Black - the piano man- in concert at the Meeting House at 7.30pm on Friday September 13th 2019.

If you didn't join us for that event you missed a real treat. Matt was in astounding form and the audience were dancing in the aisles, singing at the tops of their voices and having a great time. This man plays the piano as if it is part of himself....I have never, ever, seen anyone  get so much out of one instrument.  He is a great evening's entertainment. 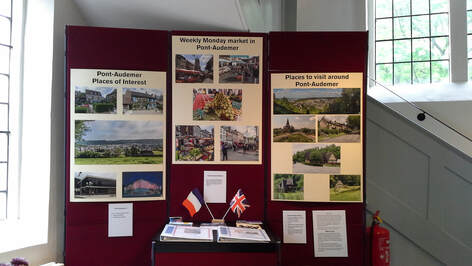 Our last event in September was a  Photographic display of our twin town Pont-Audemer which took place in The Meeting House. A small part  of the display is shown in the picture.
The display ran from Sept 7th until September 28th, we hope you managed to see our twin town in photos and enjoyed a cup of tea or coffee.

Information about the  activities of the Association were available as was archive displays on the Pedal Car Grand Prix, the Twinning and the Carnival, courtesy of The Meeting House archivist.

Membership of the Twinning Association, for2020 is only £15. 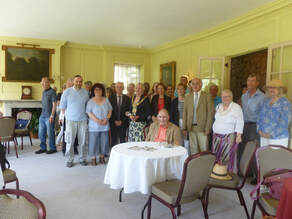 Residents of Pont-Audemer visited Ringwood on a 4 day civic visit from May 30 to June 2nd....see Twinning Visits ...2019 Visit... tab for further details. This picture is taken in the Mayor of Winchester's residence where we were invited for a morning coffee. 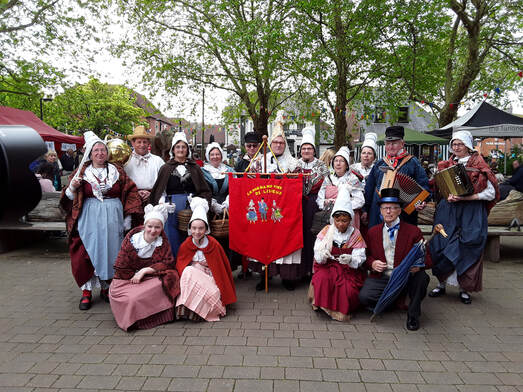 A folk dancing group from Pont-Audemer and Lisieux in Normandy entertained at various venues around the town.  Audience participation was a great feature and  involved many visitors in the dances.  We hope you managed to see them and enjoyed their joie de vie.
Many thanks to those members of the Twinning Association and Rotary that hosted them. 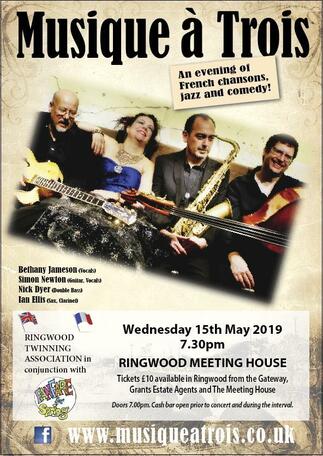 Our first event in May for 2019 was in conjunction with Fanfare for Spring.

Our contribution was a musical event by Musique a Trois, a local band that performed an entertaining mixture of English and French songs flavoured with a touch of Jazz and comedy. 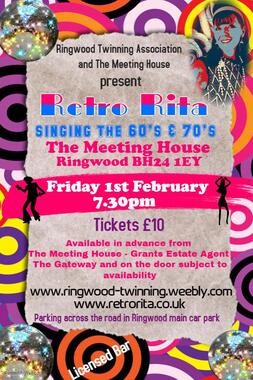 Our first event of 2019 took place at 7.30pm on Friday Feb 1st, with doors opening at 7pm.  This was another joint musical venture with the Meeting House as we continue to showcase local musical talent.

The weather hit us quite hard with snow and freezing temperatures the day before the event. Those intrepid folk who braved the elements were treated to a real walk down memory lane. The first half was devoted to the sixties and the second half really hit the spot with a good hour of nostalgia from the seventies.  The words just came instantly back  to the audience and memories just kept rolling in.

All proceeds go towards paying for the costs of the visit here by Pont-Audemer and the upkeep of The Meeting House.